Local individuals and political leaders devoted their efforts to aid in the prosecution of the war in Europe.  Sewing socks, gloves and bandages and raising war gardens were popular activities.  Feelings of patriotism were high with patriotic services and war bond drives.  Vigilant individuals were on the lookout for pro-German supporters and suspected spies. 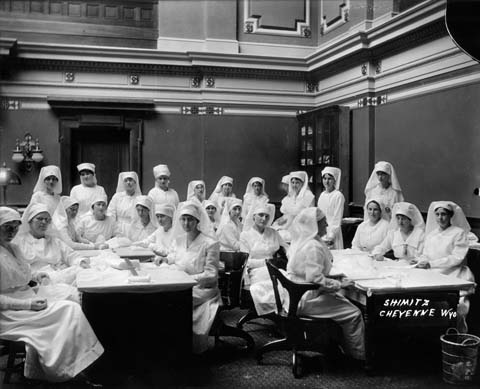 Many women were eager to support their men oversees in any way they could. The American Red Cross provided a useful outlet for these energies by coordinating projects to roll bandages, knit socks, and raise money to help the Red Cross efforts on the European battlefields. Wyoming routinely surpassed the state quotas for these projects.

The Red Cross also provided training for women who wished to serve as nurses and ambulance drivers in Europe.

To help finance the Great War, the United States Government called on its citizens to purchase bonds. These Liberty Bonds were issued in a series of national bond drives. States and local communities were given target quotas for their purchase and incentives were also offered.

The Wyoming Council for National Defense was organized on April 27, 1917, to assist the federal Council of National Defense in carrying out its work to coordinate resources and industry in support of the war effort, including the coordination of transportation, industrial and farm production, financial support for the war, and public morale. The Council was headquartered in the Senate Chambers of the Wyoming State Capitol Building. Several committees were organized, including the War History Committee, Woman's Committee, Publicity Committee, Americanization Committee, and Motor Transport Committee.

The War History Committee was organized in August 1918 "for the purpose of collecting and preserving all historical materials relative to Wyoming's participation in the World War" and chaired by State Librarian Agnes Wright Spring. Local chapters were organized in each county. Early efforts were concentrated on compiling service records for men from Wyoming since, according to their report, the Federal Government did not keep soldiers and sailors records by state.

The Publicity Committee oversaw the promotion of war work efforts in local newspapers and to publicize drives by various service organizations and the United War Work Campaign (UWWC). The UWWC, organized in 1918, was a joint campaign of the seven welfare societies: National War Work Council of the Young Men’s Christian Associations, War Work Council of the National Board of the Young Women’s Christian Associations, National Catholic War Council (Knights of Columbus), Jewish Welfare Board, War Camp Community Service, American Library Association, and the Salvation Army.

Starting in 1917, the Four Minute Men society organized local volunteers to give four-minute long speeches at movie theaters during the breaks for reel changes. The federal Committee on Public Information (CPI) would provide talking point for topics related to civil defense programs and how individuals could contribute to the war effort. Though many of the volunteers were men, women, including Dr. Grace Raymond Hebard, also spoke. The program ended on December 24, 1918.

The military's need for supplies often led to shortages on the home front. Metal and fats were needed to produce guns and munitions (bullets and bombs). Basic food supplies became increasingly sparse, though Wyomingites did not experience it to the extreme extent seen in Europe. Meat, especially Wyoming beef, sugar and wheat were needed to feed the troops and so American's were asked to tighten their belts and use alternate foods. Potatoes were a popular substitute for wheat. Chicken, fish, and even meatless meals were promoted to replace beef. Victory gardens were touted as a patriotic and economical way to feed the family.

Even with these efforts, food prices skyrocketed and some items were increasingly difficult to obtain. Lessens learned during the Great War led to the implementation of rationing and price control during World War II.

Xenophobia - intense or irrational dislike or fear of people from other countries.

Jingoism - extreme patriotism, especially in the form of aggressive or warlike foreign policy

Fear of invasion from Central Powers countries (Germany, Austria-Hungary, the Ottoman Empire and Bulgaria) increased tensions between ethnic groups in the United States. Immigrants and those of German and Eastern European decent were scrutinized and their loyalty to the United States was questioned, often regardless of their status as U.S. Citizens or intended citizens. Many families chose to Americanize their names in an effort to prove their loyalty and distance themselves from the suspicion. Brauns became Browns, Muellers became Millers, Johanns and Heinrichs became Johns and Henrys. Some  even changed the names of their businesses. In Cheyenne, the Germania Barbershop became the Liberty Barbershop and the interior was draped with American flags. The town of Germania in Big Horn County changed its name to Emblem in an effort to be seen as more American and patriotic. 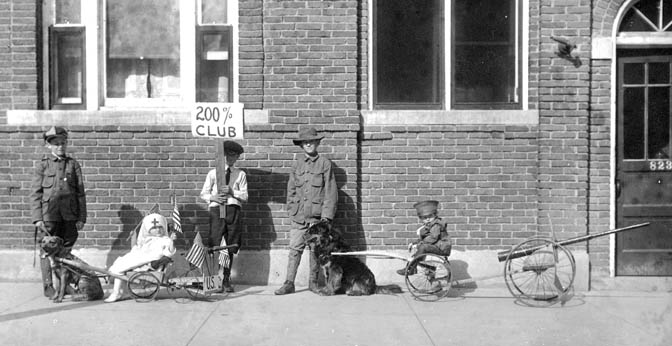 Children representing the 100% American Club in Cheyenne, dressed as soldiers and a Red Cross Nurse. The "200% Club" sign was a riff on the club's name. (WSA Meyers Neg 3984, photo by Joseph Shimitz)

This period also saw a sharp increase in ultra-patriotic groups. These were organizations that promoted extreme loyalty to the United States. Groups like the 100% American Society were active in Wyoming. In many cases, these groups were a way to show support for the country and the troops fighting in Europe. The clubs and groups would help organize bond and supply drives, patriotic parades and carnivals to raise money for the Red Cross, or send letters to soldiers. Other groups would hold Americanization seminars and English language classes for new immigrants to help them assimilate more quickly.

These groups could also encourage their members to be intensely suspicious of foreigners, especially those with ties to Central Powers countries. Some individuals would report suspicious "unpatriotic" activities of neighbors to the government. This could be anything from being critical of the US government policies to speaking German in public. Sometimes these were legitimate threats to national security, like the actions of suspected members of the terrorist group the Black Hand, but often it was simply a misunderstanding of cultures.​

During World War I, there were concerns that immigrants from enemy countries would sabotage the national war effort or assist their home countries in attacking the United States from within its borders. For this reason, German nationals (German citizens) were required to register with federal officials and carry identification cards. Information collected would then be used to assess the threats posed by these individuals. Under the provisions of a Presidential Proclamation of April 6, 1917, non-naturalized female aliens were likewise registered as an additional national security measure that included those women of American birth that were married to enemy aliens. Registration included filling out a form disclosing their age, date and place of birth, spouse's name, childrens' names, current address, occupation and employer and included a photograph and finger prints.

Though it never gained enough support to be enacted, there was discussion of requiring German nationals to wear a pin or insignia on their clothing at all times as well as carrying their registration cards.

In the 1920's, Congress ordered the registration records destroyed, though some survived in state collections, like those for German women at the Wyoming State Archives.

Slackers were men who did not register for the compulsory draft before the signing of the armistice on November 11, 1918. This was seen as cowardly and unpatriotic. Lists of men who had not registered were routinely published in local newspapers in an effort to encourage them to register. Unfortunately, the men on these lists were often harassed, even if their name appeared in error. The harassment often included men who had been rejected by local draft board for medical reasons.

Delinquents were individuals who did not contribute to the national war effort. Patriotic activities included participating in the Red Cross, voluntarily changing their eating habits (eating less wheat and meat and more potatoes and corn), and growing victory gardens, among others. Citizens were encouraged to report unpatriotic activities to the authorities.