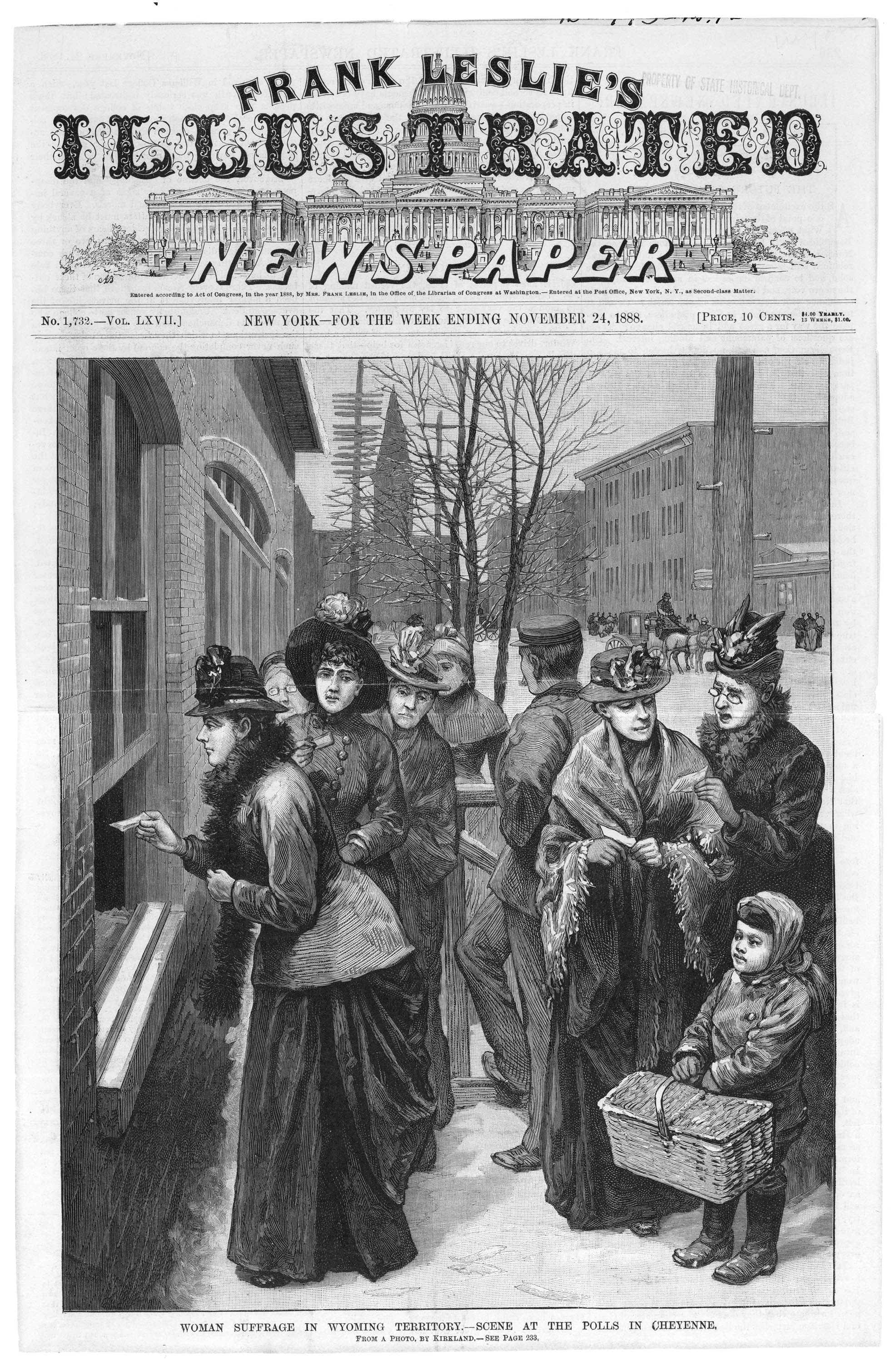 Suffrage is defined as the right to vote in elections. In 1869, Wyoming became the first state or territory in the nation to grant suffrage to women on equal footing with men, as well as the rights to hold public office, own and inherit property, and the guardianship of minor children.

This guide explores the topic of women's suffrage in Wyoming and helps answer questions like:

1st State or Territory to Grant Universal Suffrage: In 1869, the first Wyoming Territorial Assembly passed the Women's Suffrage Act granting women the right to vote and hold public office in the territory, putting them on equal footing with men. When Wyoming became a state in 1890, this right was written into Article 6 of the new constitution ensuring universal suffrage.

1st Female Justice of the Peace in the US: Esther Hobart Morris, appointed February 17, 1870 in South Pass City. Her first act after taking office was to charge her predecessor for failing to hand over the court's records to her. She dropped the charges due to her conflict of interest as both plaintiff and judge but kept her own docket book during her term.

1st Female Bailiff in the US: Martha Symons Boies Atkinson appointed to see to the needs of the first female jurors, 1870 in Laramie.

1st General Election in Which Women Voted: September 6, 1870. Louisa Swain of Laramie cast the first documented vote by a woman in Wyoming. Augusta C. Howe of Cheyenne is said to have been the first in Cheyenne, following Swain by 30 minutes.

1st Presidential Election in Which Women Voted: 1892, Wyoming was the only state with women's suffrage during that election.

1st Town Governed by Women: Dubbed the "petticoat government" by the press, the town of Jackson elected 3 councilwomen, a female town marshal and a female mayor in 1920. Several of the women were reelected.

1st Female Governor in the US: Nellie Tayloe Ross was elected Governor on November 5, 1924. Although she and Ma Ferguson of Texas were elected on the same day, Ross was inaugurated on January 5, 1925, two weeks before Ferguson, and thus holds the title. Ross' husband, Governor William B. Ross, had passed away suddenly almost exactly one month before she was elected. She did not campaign for herself leading up to the election as she was still in mourning and wore black for much of her term. She ran for re-election in 1926, but narrowly lost to Frank Emerson.

1st Mixed Jury After Statehood: Sweetwater County, May 8, 1950. According to Cora Beach’s Women of Wyoming, Volume I, just after the selection of the 1st female jurors in 1870, the lawyers and pundits began to push for a literal reading of the law describing jury qualifications. It had been passed prior to the act granting women’s suffrage and thus specified that the jurors be male. As no one pushed to change the law, the supreme court did not provide a definitive decision nor was the law changed by the legislature until 1949. The first mixed jury in Wyoming since statehood, and thus the 1st female jurors in 80 years, sat the next year, on May 8, 1950.

1st Female President of the University of Wyoming: Laurie Nichols, 2015