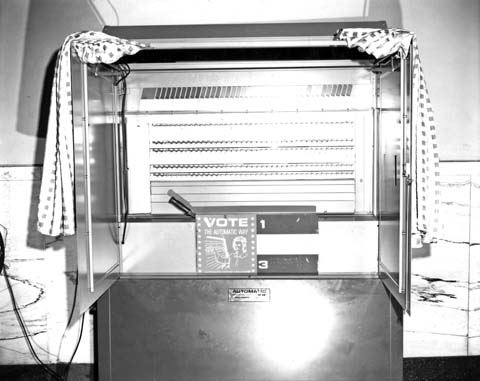 Who Cast the First Vote?

Louisa Swain of Laramie, about 70 years old, cast the first documented vote by a woman in Wyoming on September 6, 1870. According to the Laramie and Cheyenne newspapers, Swain beat Augusta C. Howe, the 27 year old wife of the U.S. Marshall Church Howe of Cheyenne, to the polls by 30 minutes.

Newspapers have survived for Laramie, Cheyenne and South Pass, though other towns existed in Wyoming Territory in 1870. None of these other towns put forward candidates for the honor of being the first, though this does not mean that women did not vote or vote early in the day at these locations.

Cora Beach, in her book Women of Wyoming (1927) stated that Judge M.C. Brown, Laramie's first mayor, had witnessed the voting in that city and had corroborated the story that Swain, who she erroneously calls Eliza, cast the first vote. Beach goes on to say that, "Those interested afterward made investigation, while there were still living many people who had participated in the elections throughout the territory, and the evidence was satisfactory that the Laramie polling place really had been opened before those in Cheyenne or any other place."

In 1892, the women of Wyoming became the first women in the nation to vote for president during a general election.

While women could vote in Wyoming as early as the 1870 election, all citizens of Wyoming Territory, male and female, were barred from voting for president in general elections because of the territory's status. According to US Constitutional Amendment 17 Article 1, only states are allowed to vote in national elections. The first presidential election after Wyoming became a state in July 1890 was held in 1892.

How Many Women Voted?

How many women actually voted once they were granted suffrage in Wyoming?

This is a great question, but one that will probably never be accurately answered.

Estimates can be made using two methods:

1. Compiling numbers based upon the numbers of women registered to vote in each county.

To the best of our knowledge, the Wyoming Secretary of State's office did not compile this type of demographic statistics so a count would need to be made, line by line, in each county precinct's voter registration/poll books. This count would also include women who registered but did not actually vote. Unfortunately, very few poll books have survived, so a full count may not be possible.

2. Estimating the number of women eligible to vote based upon Federal census statistics.

According to the 1870 US Federal Census, about 600 women in Wyoming were eligible to vote in elections.

There were 1,347 native born women enumerated in Wyoming Territory in 1870. Of these, 741 were under 21 years old. This estimate does not include women who were naturalized citizens.

According to the 1890 US Federal Census published statistics, about 7,000 women in Wyoming were eligible to vote in the 1890 election. This was the first election after statehood and included voting for the governor and many other state officers. The first presidential election was held in 1892, but the Federal censuses were only taken every 10 years. Since 1892 is closer to 1890 than 1900, those stats would most likely be a more accurate estimate of eligibility.

This method does not count how many of the eligible women actually voted in 1890. While it does include the number of native born women over the age of 21, it does not account for women who were naturalized citizens and includes Native Americans who were not classified as citizens.

We do know that of the approximately 600 women eligible to vote in the 1870 election, at least 289 are reported to have voted. According to the newspapers, 171 women voted in Cheyenne, 93 in Laramie, 8 South Pass City, 8 in Atlantic City and 9 in Miner's Delight. This would suggest that women voted at approximately the same rate as men in Cheyenne and Laramie.

Who did these women vote for?

While there may be anecdotal evidence for individual women, this question cannot be answered accurately for the female population as a whole. According to the Laramie and Cheyenne papers in 1870, the women's vote skewed heavily in favor of Republican candidates. Louisa Swain of Laramie, the first documented vote cast by a woman in Wyoming, was reportedly a straight Republican ticket.

What about women of color?

There was no legal distinction of voting rights based upon race or ethnicity. See also the Women of Color tab in this guide.

The Organic Act of Wyoming - An Act To Provide A Temporary Government For the Territory of Wyoming, approved July 25, 1868, defined a qualified voter as:

Section 5. And be it further enacted, That every male citizen of the United States above the age of twenty-one years and [including] persons who shall have declared their intention to become citizens of the United States, who shall have been a resident of the said Territory at the time of the passage of the Territory, and shall be eligible to hold any office in said Territory; and the legislative assembly shall not at any time abridge the right of suffrage, or to hold office, on account of race, color, or previous condition of servitude of any resident of the Territory; Provided, That the right of suffrage and those who shall have declared on oath before a competent court of record their intention to become such, and shall have taken an oath to support the constitution and government of the United States.

The Women's Suffrage Act of 1869, added the following qualifications:

Be it enacted by the Council and House of Representatives of the Territory of Wyoming:

Section 1. That every woman of the age of twenty-one years, residing in this Territory, may, at every election to be holden under the laws thereof, cast her vote. And her rights to the elective franchise and to hold office shall be the same under the election laws of the Territory, as those of electors.

Section 2. This act shall take effect and be in force from and after its passage.

The Constitution of the State of Wyoming included universal suffrage, laying out the following qualifications:

Section1. The rights of citizens of the state of Wyoming to vote and hold office shall not be denied or abridged on account of sex. Both male and female citizens of this state shall equally enjoy all civil, political and religious rights and privileges.

Section 2. Every citizen of the United States of the age of twenty-one years and upwards, who has resided in the state or territory one year and in the county wherein such residence is located sixty days next preceding any election, shall be entitled to vote at such election, except as herein otherwise provided.

Must be Citizens of United States

Section 5. No person shall be deemed a qualified elector of this state, unless such person be a citizen of the United States.

Section 6. All idiots, insane persons, and persons convicted of infamous crimes, unless restored to civil rights, are excluded from the elective franchise.

Section 8. No soldier, seaman, or marine in the army or navy of the United States shall be deemed a resident of this state in consequence of his being stationed therein.

Section 9. No person shall have the right to vote who shall not be able to read the constitution of this state. The provisions of this section shall not apply to any person prevented by physical disability from complying with its requirements.