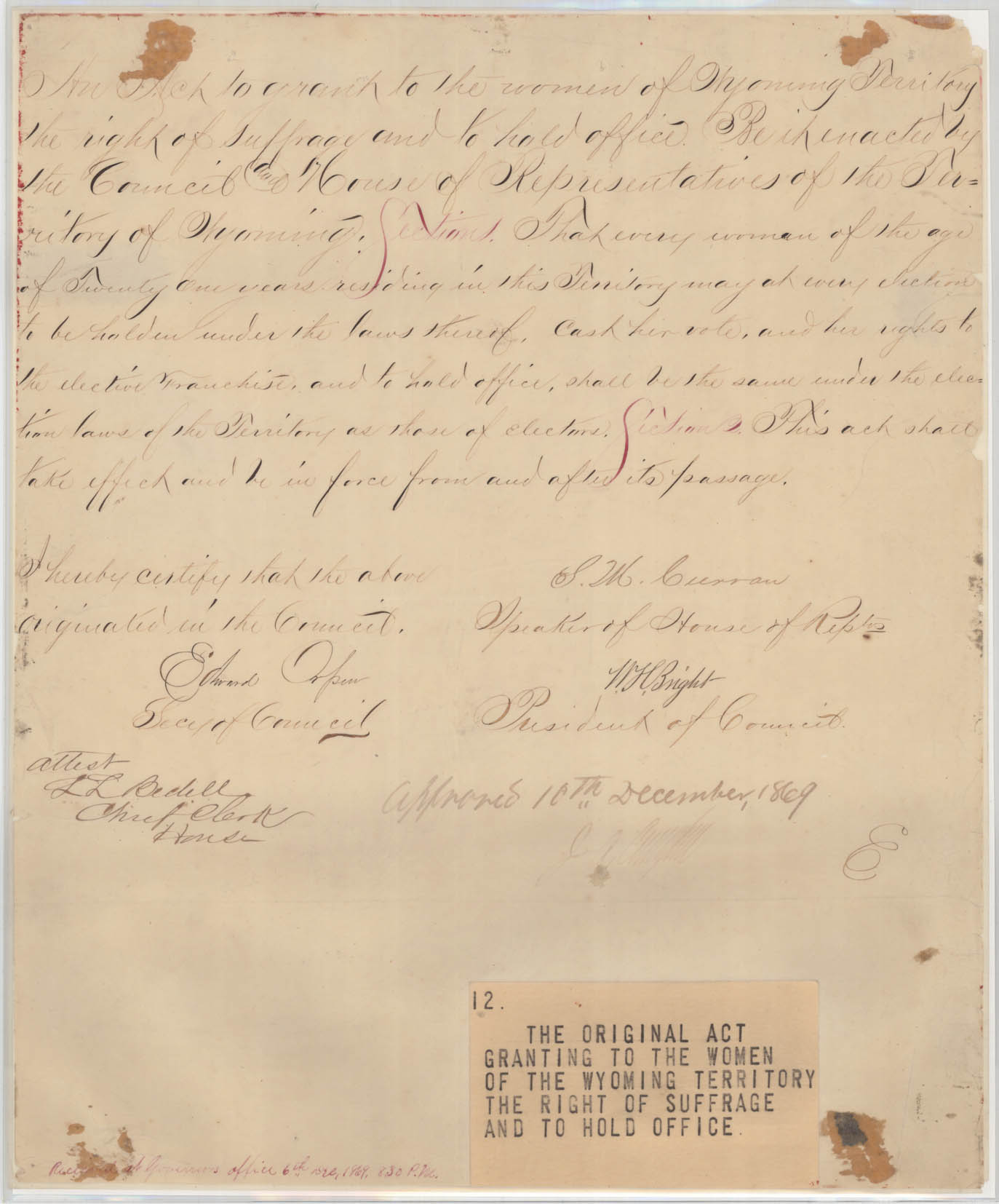 During the First Wyoming Territorial Legislative Session in 1869, William H. Bright introduced a bill to give equal suffrage to women in the new territory. The resulting statute became known as the Women's Suffrage Act and its passage on December 10, 1869, made Wyoming Territory the first in the world to guarantee women the right to vote in all elections and hold any and all public offices. This act preceded national suffrage equality and the passage of the 19th Amendment by 50 years.

An Act to grant to the women of Wyoming Territory the right of suffrage and to hold office. Be it enacted by The Council and House of Representatives of the Territory of Wyoming.

Section 1. That every woman of the age of twenty-one years, residing in this Territory, may at any election to be holden under the laws there of, cast her vote. And her rights to the elective franchise, and to hold office, shall be the same under the election laws of the Territory as those of electors.

Section 2. This shall take effect and be in force from and after its passage.

Speaker of House of Reptvs

During the 1871 Wyoming Legislative Session, there was a movement to repeal the Women's Suffrage Act. The movement was not so much against the concept of women's suffrage nor a commentary of the failure of its institution as it was a fight between the Republic and Democratic parties themselves. The vote was stright down the party lines, and was vetoed by Governor John Campbell. Campbell addressed the Legislature to explain his reasoning, addressing the opposition's arguments one by one, and declaring his full support for women's suffrage.

Section 1. Equality of rights under the law shall not be denied or abridged by the United States or by any State on account of sex.

Section 2. The Congress shall have the power to enforce, by appropriate legislation, the provisions of this article.

Section 3. This amendment shall take effect two years after the date of ratification.

First introduced to Congress in 1923, the Equal Rights Amendment (ERA) to the United States Constitution was proposed to ensure that the rights of women were equal to those of men across the nation. The amendment was controversial from the start. Working class women and organized labor opposed it because it would strip them of protective legislation at work, like shorter work days and prohibiting night work and heavy lifting. Middle-class and white collar workers supported the amendment as it would put them on equal footing with their male counterparts.

In 1972, following Women's Strike for Equality in Washington, DC, and other vocal demonstrations from the National Organization for Women (NOW) and other organizations supporting the women's liberation movement, Representative Martha Griffiths of Michigan successfully introduced House Joint Resolution No. 208. In short order, it was adopted by both the House and Senate and endorsed by President Nixon.

After much debate in the Senate and in the state, Wyoming became the 23rd state to ratify the amendment on January 26, 1973. Supporters celebrated by decorating the Esther Morris Statue outside the Capitol Building with flowers.

Despite an initial surge of 30 states ratifying the amendment, only 35 of the necessary 38 states were gained by its expiration date on March 22, 1979. By this date, four of the 35 states had voted to rescind their ratifications, bringing the total down to 31 states. In 1978, Congress extended the deadline to 1982, but this did not make a difference. In 2017, Nevada made the symbolic gesture of ratifying the amendment 35 years past the deadline. 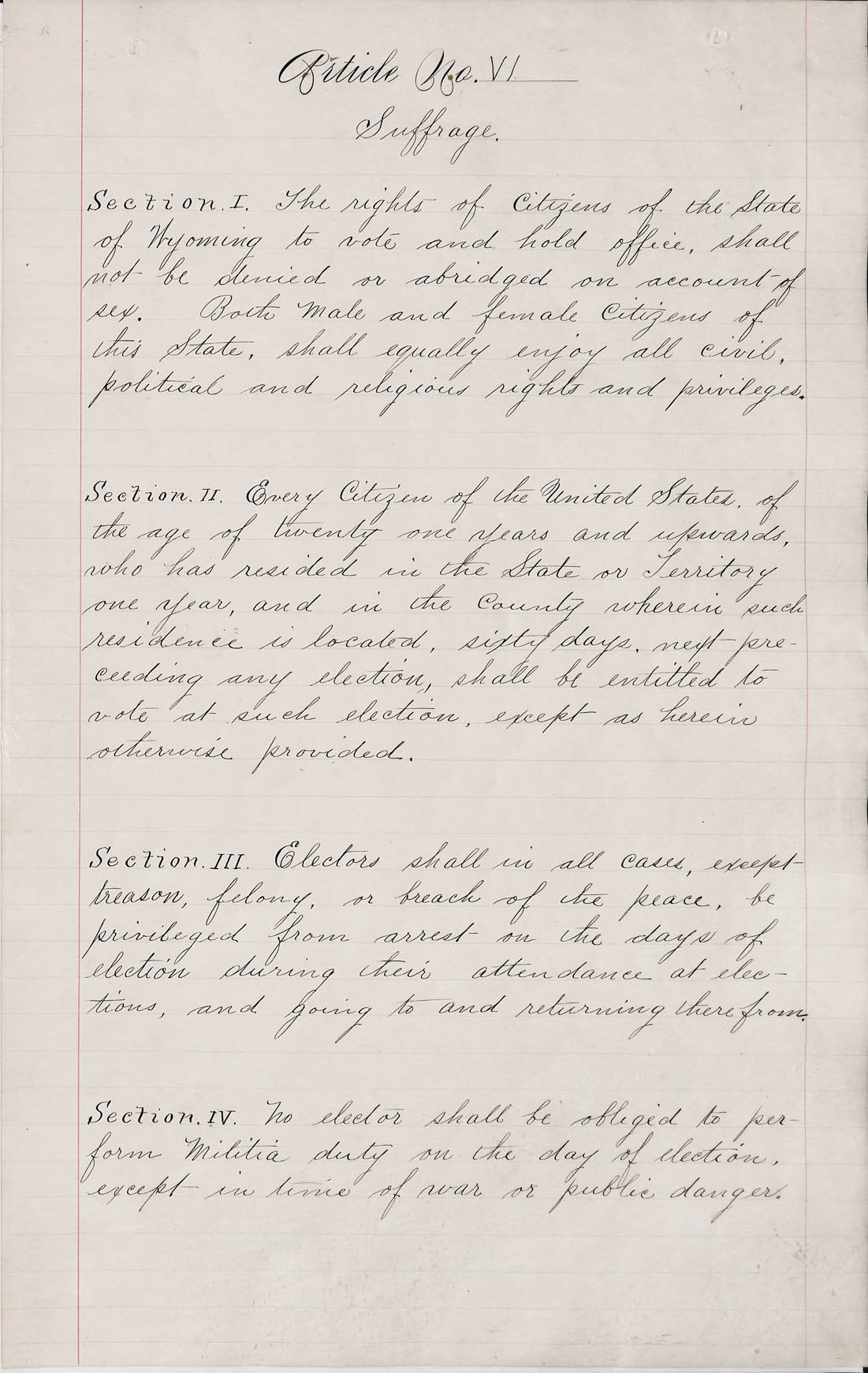 During the Constitutional Convention, the inclusion of women's suffrage was discussed at length. The question was not so much whether universal suffrage should be included in the new constitution, but how. Some delegates insisted that the citizens should be allowed to vote on the issue separate from the Constitution while others argued that there was no reason it should not be an integral part of the document. In the end, Wyoming was admitted as the 44th state and the first to guarantee universal suffrage in its constitution on July 10, 1890.

Legal Definitions of Voters in Wyoming

Several documents specified the qualifications for voters in Wyoming. See the Voting tab for more information.

The first jury to contain women was a grand jury in Laramie that sat for a three week court term starting in March 1870, hearing several cases. (This also called for the first female bailiff, Eliza Stewart Boyd as a man couldn't very well see to the needs of a group of women.) In April 1870, a petit jury also including women was called in Laramie. These ladies were probably chosen because the court hadn't been able to convict anyone and crime was rampant in the town. 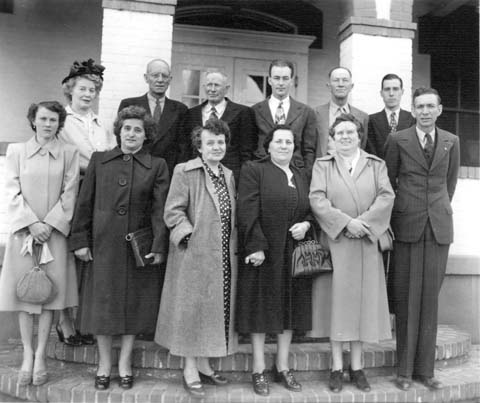 According to Cora Beach’s Women of Wyoming, Volume I, it was about this time that the lawyers and pundits began to push for a literal reading of the statue describing jury qualifications. The legislation had been passed prior to the act granting women’s suffrage and thus specified that the jurors be men. As no one pushed to change the law, the Wyoming Supreme Court did not provide a definitive decision nor was the law changed by the legislature until 1949. The first mixed jury in the State of Wyoming, and thus the first female jurors in 80 years, sat the next year on May 8, 1950.