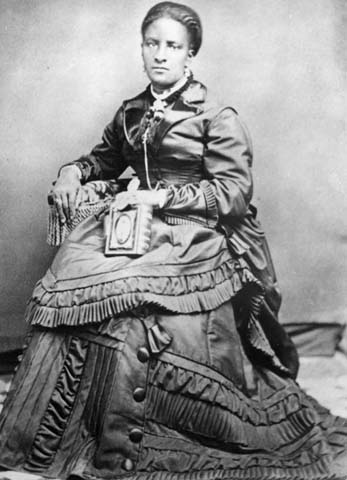 For more information, see the Presidential Elections box under the Voting tab in this guide.

Native Americans were not considered citizens of the United States until the passage of the Indian Citizenship Act on June 2, 1924. This meant that both men and women were barred from voting in Wyoming until 1924 because of their non-citizen status. After they were declared citizens by the Federal government, they became qualified voters in Wyoming.

Could Women of Color Vote in the 1870 Election?

It appears that there would have been no legal bars to non-white women who were over 21 years old and US citizens voting in Wyoming after the passage of the Women's Suffrage Act of 1869 (see Voting tab for voter qualifications). Whether they exercised that right during the 1870 election is another question.

There were few women in the territory and even fewer women of color, thus anecdotal evidence is scarce, though it does exist. With enough digging into census and voting records, examples may be found to help answer the question of whether the women of color were at least registered to vote. In 1870, individuals voted by choosing party tickets. Observers and precinct judges could often tell if you voted a "strict party ticket" or if you split your vote by picking up both party tickets. By 1890, voting laws had changed and the secret ballot was used, so records could tell us if they registered and possibly if they actually cast a vote, but not who they voted for.

Justice Kingman recalled a group of African-American women voting in the 1870 election in Cheyenne:

I remember a case in point, which, at the time, caused me much uneasiness. We had, at first, a large proportion of Southern men and of Northern Copperheads. By that I mean men who advocated secession, and came to Wyoming to escape being drafted. Carriages were employed by the candidates to bring ladies to the polls. At the hotel were a number of colored girls employed as servants. After a while a carriage drove up with four of these colored girls in it. They were helped out, and as they went up to the polls the crowd quietly parted; they voted and returned to the carriage without a word said. Then I breathed freely; I knew that all was safe." -- Woman Suffrage in Wyoming, 1876

In 1870, only 10 Black women over the age of 21 were enumerated in the Territory, all of whom would have been eligible to vote. By 1890, that number had grown to 187 total colored women, though this most likely included a few Asian and "civilized Native American" women as well.

The numbers for Asian women were even more miniscule. Only 5 were enumerated in 1870, all Chinese though Japanese was also a classification that year. The 1890 census statistics did not break out gender numbers or ages for non-black colored classifications. These few women were lumped under the "colored" category.  Most likely women reported as "Asian" would not have been eligible to vote as nearly all were foreign born and not naturalized citizens.

Native American women would not have qualified to vote until 1924 as they were not considered U.S. Citizens until that year. (see Native American Voting Rights box to left)

The Federal census statistics did not include numbers for Hispanic/Latina women until the 1980 census when "Hispanic" became a racial classification option. Prior to 1980, the Hispanic/Latina population was included in the "other non-white" classification. In 1930, the country of birth statistics were included and 44 women were reported to have been born in Mexico. This number, of course, did not include individuals born in the U.S. who identified as Hispanic or whose parents, grandparents or other ancestors were Hispanic, nor those born in countries other than Mexico.